Philtranco, one of the largest transport companies in the Philippines, just opened their very first route going to the north. Where? To the “Culinary Capital Of the Philippines,” which is the province of Pampanga. Being the oldest bus company in the Philippines, Philtranco has proven its dedication in the transport service and its passengers by providing ordinary, air-conditioned and first-class transport vehicles which serves the route of Southern Tagalog, Bicol, Eastern Visayas and even Mindanao.

I was one of the few bloggers together with the print media who were invited to experience Philtranco’s Pampanga route in a day of learning and food exploration. Inspite of the early call time(5 in the morning), I did not hesitate to join this interesting trip. I love to travel and I love exploring places, culture, and of course trying out different cuisines. Some things that you get to enjoy when you travel.

So, Philtranco brought us to interesting and prominent landmarks within Pampanga including the famous food stops. Where? 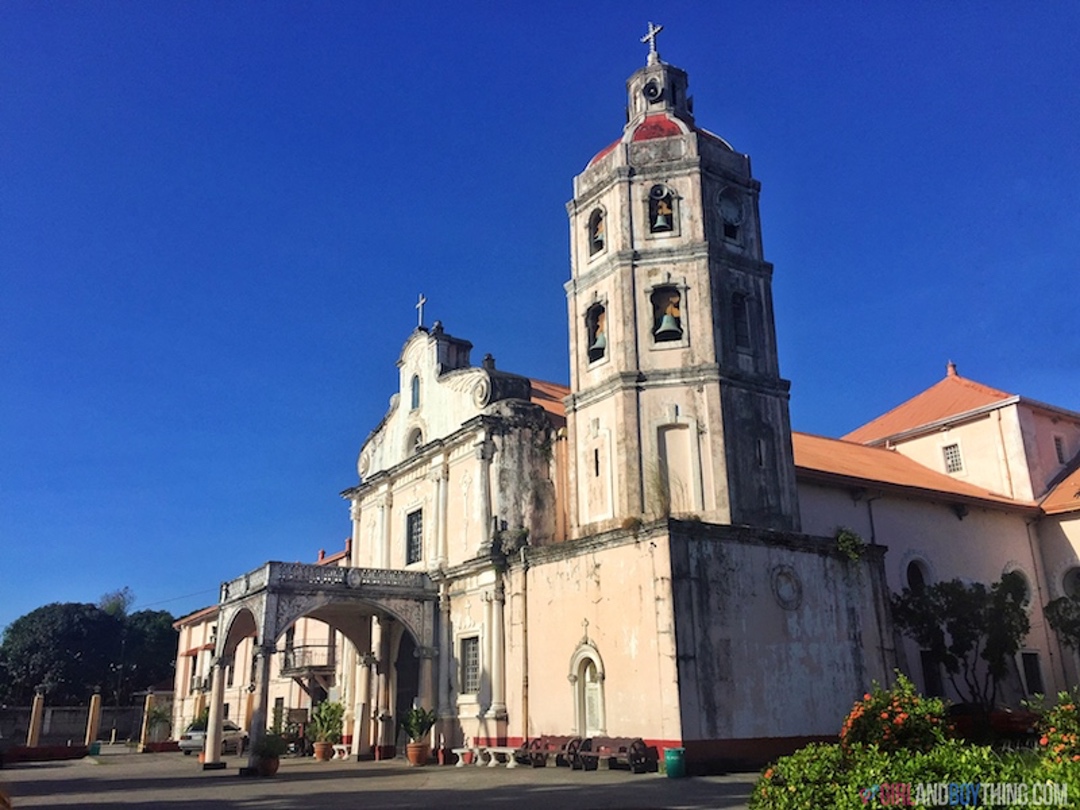 Located at Guagua Pampanga, Betis Church was built year 1660 under Father Jose de la Cruz and beautified in 1939 by Father Santiago Blanco. This Baroque-inspired church is one of the 26 elite churches in the country and has been declared as National Cultural Treasure by the National Museum and the NCCA.

A post shared by Cristelle Torres (@cristelletorres) on Dec 9, 2017 at 4:13am PSTKnown as the “Sistine Chapel of the Philippines”, Betis Church displays an amazing work of art on its ceiling just like the one in Rome. This interior ceiling was hand-painted by the famous Anac Baculud, a relative of Juan Crisostomo Soto, by the name of Isidro C. Soto-mentored by Dr. Sijuco. 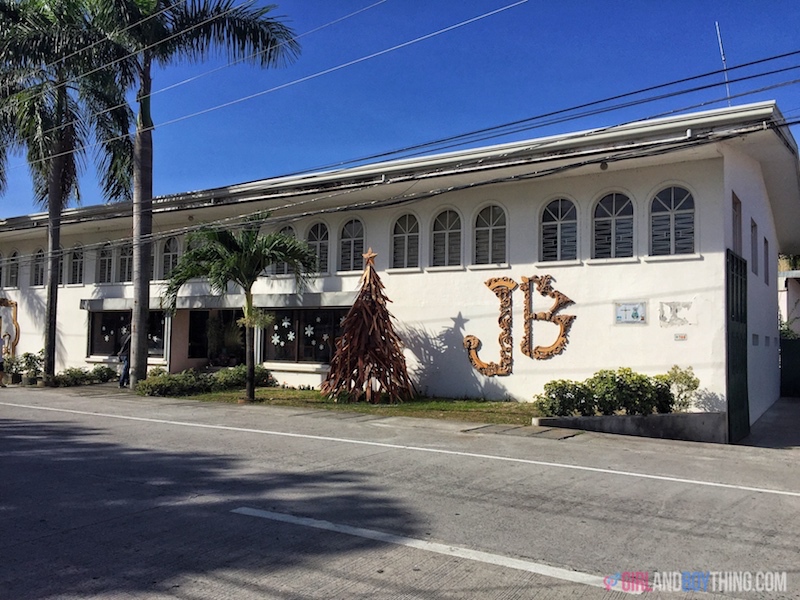 If you are looking for fine furnitures and fixtures for your home or office, this place is a must-go to place. JB Betis WoodCrafts is a leader in hand-carved and solid wood furniture and accessories like chair, tables, mirrors, consoles, bedroom pieces and cases. They also do reproduction.

They really have nice pieces and even the international market are into it. Just step into their house-like showroom and choose from their beautiful pieces. 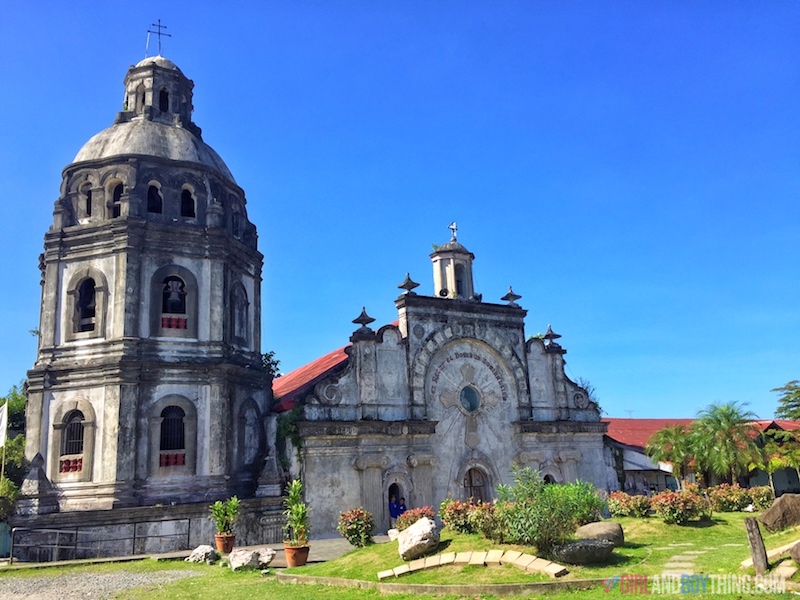 San Guillermo Parish was built in 1576, and was named after San Guillermo, the patron saint of Bacolor. This old church is located in one of the oldest town in the province of Pampanga, Bacolor.

San Guillermo Parish used to stand 12 meters high but after being destroyed and half-burried by lahar during the Mt. Pinatubo eruption year 1991, the church never ceases to be a place of worship for its locals. 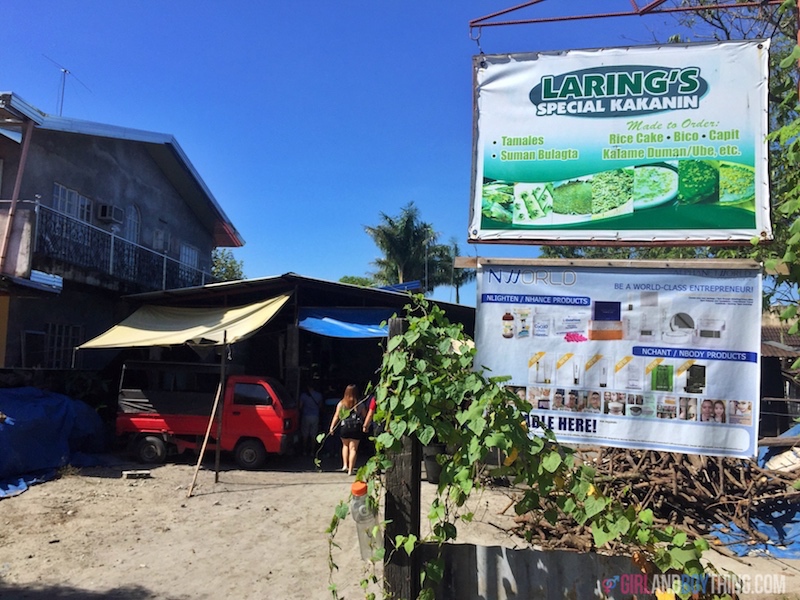 Laring’s Special Kakanin started year 19772 when owner Aling Laring  sells her original recipe tamales. That’t the reason behind her being known as “The Tamales Queen”.

Tamales or Bobotu-(which means “to vote”) in Kapangpangan was inspired by the Filipino women who gathered themselves during elections and cooked Tamales while their men went out to vote.

It was actually my first time to eat Tamales and I liked it. The taste was a little bland with a bit of meaty flavor. Actually, I really don’t know where to compare the taste because I haven’t tasted something similar to it. hahaha. But overall, it’s good enough for me.

We spent our lunch in this mansion-turned restaurant owned by no other than Chef Sau Del Rosario.

This mansion was built in the 1920’s and served as a home to a prominent doctor and his family. But then the children migrated to the US and no one was left to take care of the house. For 50 years from its renovation, no one has live in the mansion. It was then turned over to chef Sau Del Rosario and he converted the mansion into a restaurant.

I like the concept of this restaurant. It has the Filipino-inspired theme. From the interiors and even the background music playing while you eat.

And since it has it’s own farm where all the raw ingredients come from, you’ll know that what they are serving you are fresh from farm to table.

So they served us some of their signature dishes for us to try out:

Overall, all of these signature dishes above were really good(as in really delicious) except for the fried Camaro which I refused to eat because i’m not into eating exotic dishes haha😂.

After lunch, Chef Sau showed us his cooking skills and prepared on the spot his very own version of Tamales. 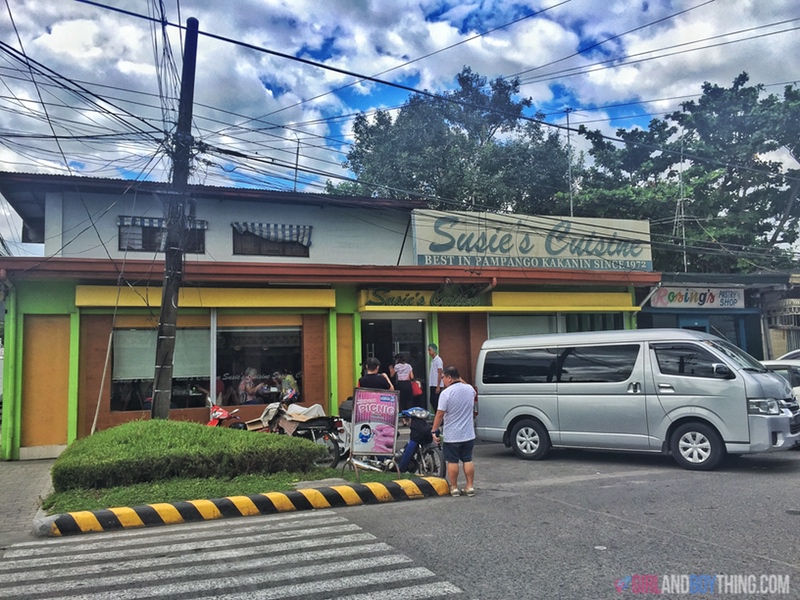 If you wanna shop for some pasalubongs and eat some home-cooked meals/kakanin, you might want to drop by Susie’s Cuisine.

Susie’s Cuisine was established in 1972 by Mrs. Anica Ayson. It started out as a small canteen in Nepo Mart in Angeles City which sells Pancit Luglug(palabok) and native rice delicacies. 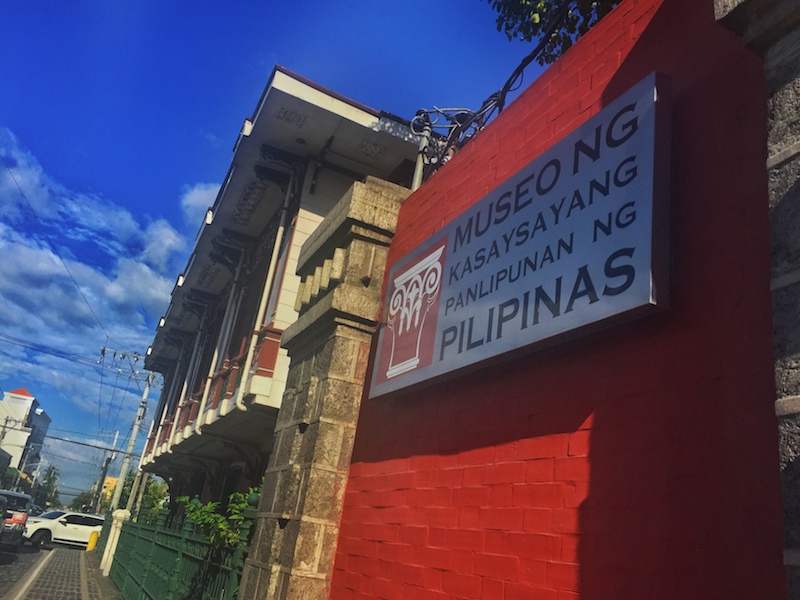 Another museum. The Pamintuan Mansion popularly known as The Museum of Philippine Social History.

The mansion was built in the year 1980’s as a wedding present for the son of Don Mariano Pamintuan and Valentina Torres. Oh! my surname is Torres too. Are they my relatives? hahaha.

Did you know? Emilio Aguinaldo celebrated the first anniversary of Philippine independence in this very house dated June 12, 1899. The Pamintuan Mansion also served as a former branch of Banko Sentral ng Pilipinas. How cool is that?

Center for Kapangpangan Studies is located within the vicinity of Holy Angel University in Angeles City Pampanga which is the biggest university in the city.

This 3-floor center was established year 2002 by the university and houses several collections, replicas, archives, manuscripts, photos, books about Pampanga’s rich culture, heritage and history. These were preserved to provide the general public substantial knowledge about Pampanga. 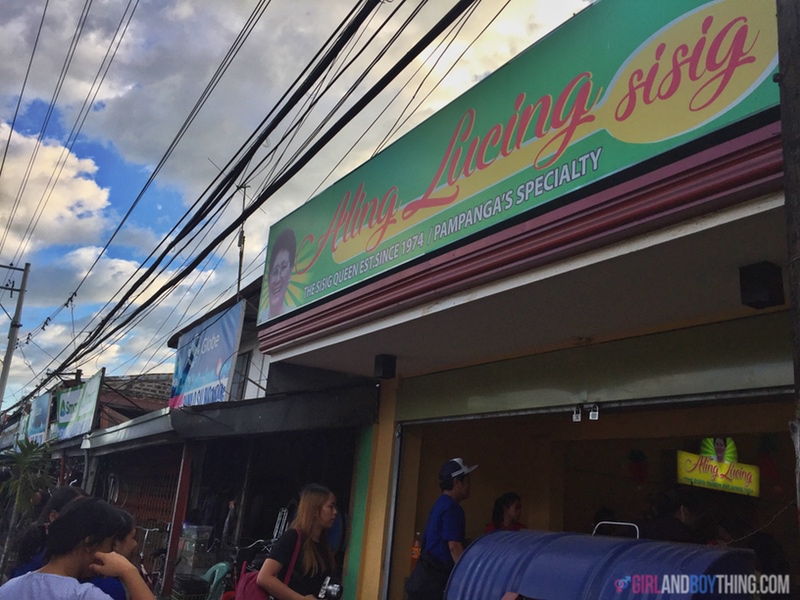 During our tour, we tried some dishes at Aling Lucing’s for dinner and of course we did not forget to try their best-selling dish which is Sisig, one of Pampanga’s specialty dishes.

Well for me, the Sisig tastes really good but I want it crunchier. As for other dishes such as Bulalo, Chicharong Bulaklak, Enselada these dishes could be a good choice as appetizer or main dish alongside with the famous Sisig.

A known international culinary personality like chef Anthony Bourdain also have tasted this Pampanga’s specialty and he personally loved it. He soon plans to add it on his menu at his street food center in New York… the Bourdain Market. 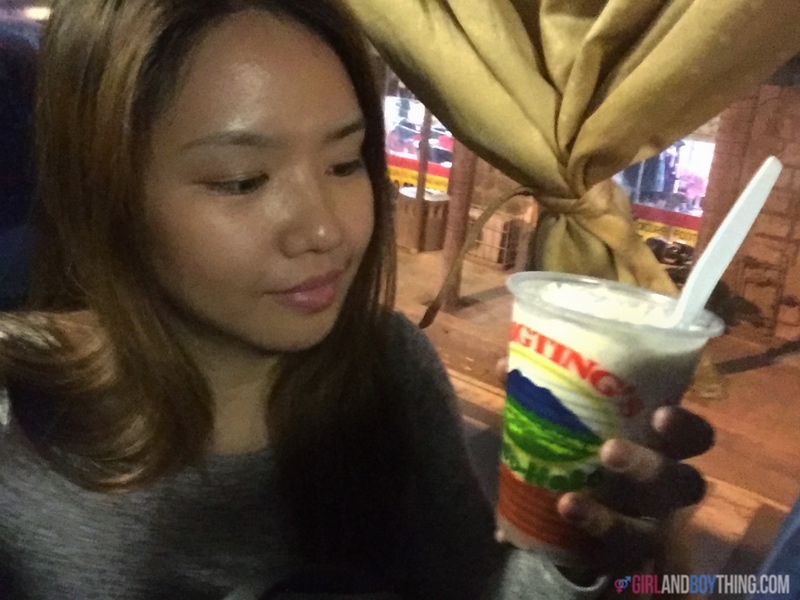 And for our last stop, Kabigting’s Halo-halo. We were not able to set foot on the store itself due to time constraint, so we just had it for take out and ate this cold indulgence inside the bus on our way home.

Kabigting’s Halo-halo only has 3 ingredients… Beans, Corn and Pastillas made of Carabao’s Milk. You may find it just few but these 3 combination blends well with each other, creating a delectable dessert that you would always crave for. 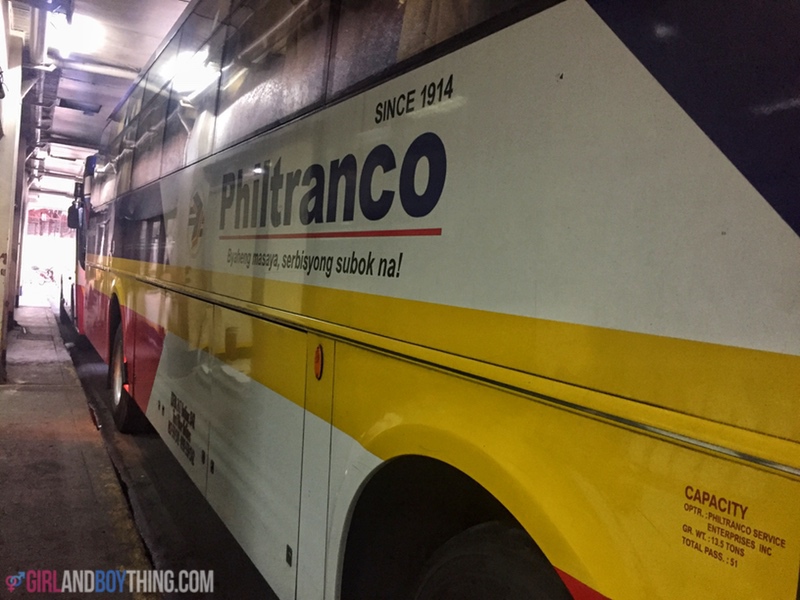 So that sums up our one day tour to Pampanga via Philtranco. If you are planning to go and explore this adventure paradise where the famous Mt. Pinatubo is located, or munch on different cuisines and delicacies, you know now that Philtranco already has trip schedules going there.

For more bookings, inquiries, reservations and bus schedules, you may visit their website at Philtranco.net or visit their official Philtranco Facebook page.