I was invited to attend the anniversary concert of ItchyWorms, together with other bloggers. It was also a night out for me  after days of hard work, and I loved it!. 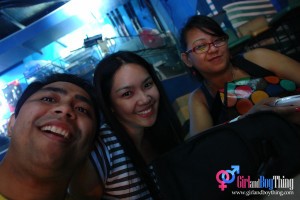 During the concert Show Itchyworms was generous  to give  Ray-ban sunglasses. Here is one gal who received one of those cool shades, after being part of an act. The guy sitting down promised to solve the Rubik’s cube before the end of the band’s song. And surprisingly, he did! Great act! 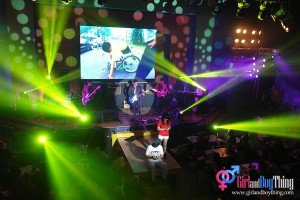 I love comedy whether in movies, people or music and I saw that humor  in Itchyworms. They also make cute, kilig, catchy music. I love how they add humor to their music and  I saw some of their music videos…  it’s hilarious.

You should see their music videos. I posted above the music video that I like from Itchyworms, I hope you’ll love it too.

Here are more info about Itchyworms,  according to http://www.filipinomusica.com

The band is composed of four members on its formation on 1996. Its history can be traced from Ateneo as its members were school buddies during their college days. The name suggested because The Scorions, The Beatles and The Crickets were taken. All the members have their own collection of unimaginable insects. Jazz has scorpions, Chino as beetles, Jugs has crickets and Kevin has worms.

Jazz Nicolas, Jugs Jagueta, Kelvin Yu and Hadrian “Haji” Cruz formed the band. However, Cruz left the band and Yu took his place. But the group of three did not last long when Chino Singson played guitar with the group and became a permanent member. Thus, the band solidified its current line-up.

Their debut independent album, Revenge of the Unsigned was released on 1998 as their official CD. The album was independently released because no record label would sign them. Mike Dizon then got hold of Revenge and pushed Viva Records to sign them.

Their first major-label album entitled Little Monster Under Your Bed was released on 2001. It contained songs from Revenge and some new compositions by Nicolas and Jugs. The album contained strong singles as “Happy Birthday”, “Antipara” and “Bituin”. Antipara is probably the most known song of the album.

On 2005, Itchyworms released their sophomore-label album entitled Noontime Show under Universal Records. The album is relatively successful compared to the first one. Buddy Zabala and Raimund Marasigan co-produced the said album. The first single “Akin Ka Na Lang” is as infectious as flu on July. The song possessed charming melody and witty lyric. Some notable songs from the album are “Beer”, “One Ball” and “Salapi”. The Repackaged album of Noontime Show was released in 2006 under Universal Records.

On 2008, the band released their self-titled album. Now, the album was under the label of Sony BMG Philippines. In addition, Pringles used “Salapi” for the nationwide campaign/songwriting contest on 2008. They also composed “Kabataang Pinoy” which was used for the first season of Pinoy Big Brother: Teen Edition, ABS-CBN’s reality show. The song is widely publicized because of constant exposures on media.