With the newest TECNO Mobile smartphone release in PH, CAMON 17, comes a photo exhibit event featuring the work of some of the country’s top photographers namely Noel Guevara, Niccolo Cosme, and Andrea Beldua . Every photo showcased in the exhibit aims to display life’s beauty through the lens of CAMON 17, while also raising awareness on issues and advocacies that matter. These photographers each put CAMON 17’s photo capabilities to the test, experimenting with different features and settings to bring out the best in their subjects.

C the Best of Nature

Through his works, award-winning conservation photographer, Noel Guevara, has been able to raise awareness and push for action towards marine conservation, an advocacy he has been passionate about for many years. To complete his series of images, it was fitting for Noel to take CAMON 17 where he does his best work – Beneath the ocean. On a weekend adventure to Layag, Anilao, Noel tested CAMON 17 for underwater photography, discovering many of its useful features such as mono portrait and HDR.

One of the photos taken by Noel captures a free diver swimming carefully over a patch of coral.

“CAMON 17 Pro’s superb 64MP rear camera lets me take underwater shots such as this effortlessly,” shares noel. “With such a high resolution camera, the details in the corals pop out even in murky visibility. It also allows for a lot of latitude in editing, allowing you to correct white balance, and perform image adjustments as you would with a photo taken with a DSLR.”

C the Best of Beauty

Andrea Beldua is known for her cinematic style, and ability to capture subjects at their peak beauty. Specializing in fashion and beauty photography, she produces images that are both attractive and real. Because she is able to present her subjects at their best, Andrea has been given the opportunity to work with many top celebrities and personalities throughout her career. 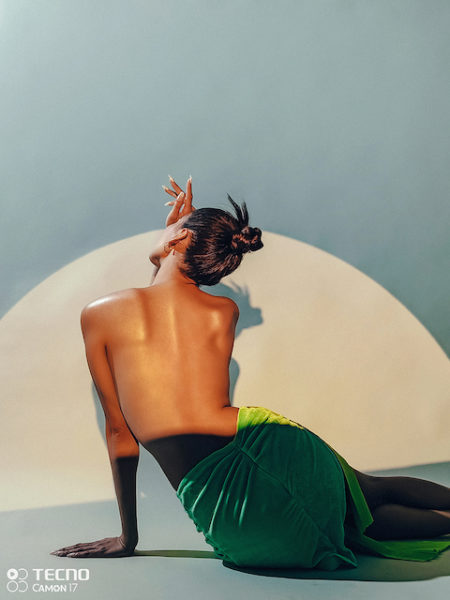 Andrea’s photos for the exhibit pay homage to Man Ray, her favorite surrealist photographer, and one of her influences. Her fascination with the female form is evident in each image in her series, which she has aptly titled, Anatomies (A Study). These strong and fierce photographs captured with CAMON 17 Pro, and featuring female subjects, show how truly powerful a woman can be. There is empowerment in the beauty of every woman, and this message comes across clearly in Andrea’s photos. According to Andrea, CAMON 17 Pro’s Magic Pixel and Mono Portrait features contributed greatly to highlighting beauty within every shot.

C the Best of Life

A photographer and creative director by profession, Niccolo Cosme is also a strong advocate of HIV/AIDS awareness in the Philippines, playing a key role in amplifying the country’s HIV response. Through his work as a conceptual photographer, Niccolo is a master at illustrating abstract ideas, and transmitting messages in the form of images.

For the exhibit, Niccolo took his CAMON 17 Pro on a photo walk through Makati and Manila, producing images that take on a human interest angle, and show striking scenes of day-to-day life in the city. The experience also allowed him to interact with wonderful people on the streets as he took their photos. 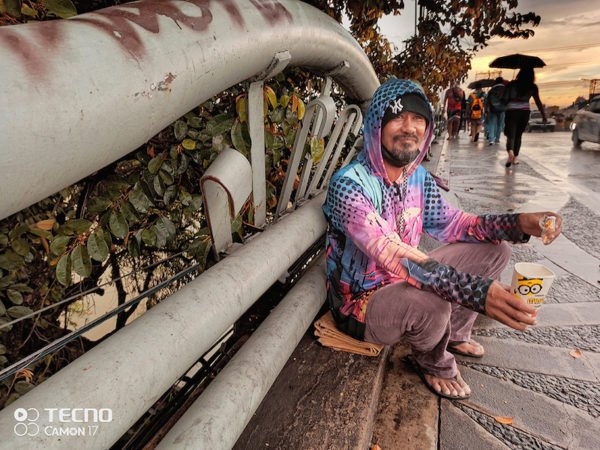 “This is a photo I took while I was walking towards Mandaluyong bridge which is about a 5 minute walk from my place,” shares Niccolo. “I instantly noticed a man begging on the sidewalk because of his colorful and almost coordinated outfit, I think he looked cool. His name is Arturo, 52, from Laguna. He said his dream is to have his own house so he does not need to beg for money on the streets. He said to me ‘Hindi ako masamang tao, namamalimos lang’ which melted my heart at that very moment. I asked if I could take a photo of him, which he happily agreed to, and asked me if he looked handsome to which I nodded. I showed him his photo and he smiled. I hope things will be better for him.”

The photo was taken during sunset, and while there was still sufficient light available, Niccolo decided to use CAMON 17’s super night feature to capture more light and details. According to Niccolo, this is his current favorite setting.

Selfie For a Cause

Following the online photo exhibit, a selfie advocacy campaign will be launched to encourage the community to get involved by sharing their own selfies for a cause. Anyone can join by simply posting a selfie on social media that features their advocacy. Their photo caption should include a brief description of their advocacy, along with the hashtags #TECNOMobileCares, #CtheBestofYou, and #SelfieAdvocacy. The best photo and caption will be selected by TECNO Mobile representatives, and the winner will receive a CAMON 17 smartphone.

TECNO Mobile is also set to donate smartphones and cash to its partner beneficiaries who are all pillars of the community – Project Malasakit, which is a scholarship project founded by Kara David; and the City of Manila through the Office of Mayor Isko Moreno, and Ina ng Lupang Pangako Parish in Payatas, who both plan to award local heroes during the pandemic for their unwavering service, as well as dedicated and promising students.

By showing support to the community, TECNO Mobile become part of the nation’s journey in rising up from life’s challenges, and learning to see the best in every situation.

Here is everything you need to know about TECNO Mobile’s new CAMON 17P and CAMON 17 Pro.

CAMON 17 Pro is equipped with a 48MP Clearest Selfie Camera in front, and a 64MP Ultra-Quad camera at the rear. This smartphone is powered by a Helio G95 processor with a 90Hz screen refresh rate, plus a long-lasting 5000mAh battery which comes with a 33W fast charger. CAMON 17 Pro comes in California dream silver and Malibu blue, and is exclusively available at the TECNO Mobile PH Official Store in Shopee Mall, at P9,990 for the 8BG+128GB model, and P10,990 for the 8GB+256GB variant.

The budget-friendlier CAMON 17P has a 48MP AI Quad  Camera, runs on a Helio G85 processor, and also has a powerful 5000mAh battery with 18W fast charging. Its high-resolution 6.8” FHD+ 1080P provides a sharper and clearer display. CAMON 17P may be purchased from the TECNO Mobile Concept Store in SM North Edsa Annex Building, and other TECNO Partner Stores. CAMON 17P comes in three colors – Magnet Black, Spruce Green and Frost Silver, and is priced at only P8,490.

To stay updated on the latest news about the CAMON 17 series, as well as exclusive deals and promos from TECNO Mobile, be sure to like and follow TECNO Mobile Philippines. Visit www.tecno-mobile.com/ph to learn more about your favorite smartphones and gadgets.